General Organic Chemistry (GOC) covers the fundamental concepts in the vast field of organic chemistry. A strong understanding of the concepts that come under GOC plays a vital role in the study of relatively advanced topics (such as the mechanisms of named reactions). Keeping this in mind, all general organic chemistry concepts have been explained in a concise, informative manner in this article. Click the link below to download all the notes provided in this article (in PDF format).

The primary topics that fall under general organic chemistry include:

Click the hyperlinks to jump to any of the topics listed above. 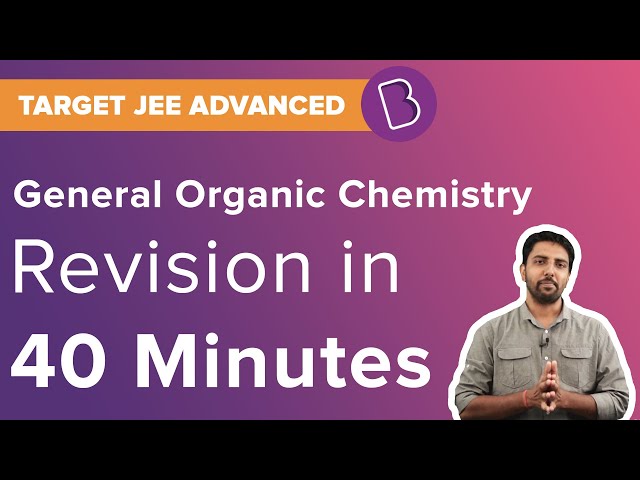 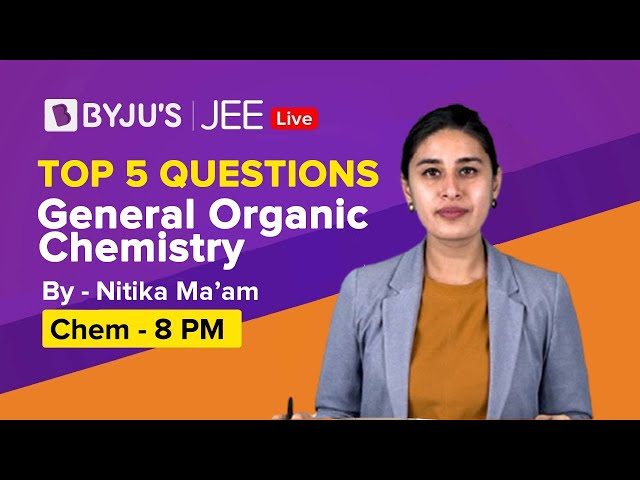 General Components of an Organic Reaction

A typical reaction mechanism proceeds in the following manner:

Adequate reaction conditions facilitate the formation of an intermediate from the chemical reaction between the reactants. These intermediates are generally unstable and quickly react further to yield a product.

The reactants of an organic reaction can be classified as:

The site of reagent attack can vary based on the nature of the reagent (electrophilic or nucleophilic):
Electrophiles – They are electron-deficient species that attack the substrate at a region where the electron density is high.

Nucleophiles – They are electron-rich species that tend to donate their electrons. Nucleophiles generally attack the reagent at a region where the electron density is low.

Chemical reactions generally involve the breakage of existing chemical bonds and the formation of new ones. A covalent bond can break in two different ways:

Homolytic Fission – the covalent bond is cleaved in such a manner that each participating atom leaves with one unpaired electron. The chemical species that are created as a result of homolytic fission are called free radicals. They are highly reactive (due to their unstable electron configurations).

Heterolytic Fission – the covalent bond is cleaved in such a manner that one atom retains both the electrons and the other retains none. Heterolytic fissions feature the formation of an ion pair – a positively charged cation and a negatively charged anion.

The introduction of an electron-rich or electron-deficient species to a carbon chain results in the formation of a permanent dipole. This effect is called the inductive effect (since the dipole is induced by the difference in the electronegativities of the atoms in the molecule).

The direction of the dipole moment depends on the electronegativity of the attacking species (relative to the carbon atom it bonds with). Note that the partial charge (positive or negative) gained by the carbon atom is relayed through the carbon chain, as illustrated below.

Salient Features of the Inductive Effect

+I effect: The positive inductive effect (abbreviated to +I effect) involves the transmission of a negative charge through the chain. It occurs when an electron-donating group is introduced to a chain of atoms. Example of +I species: Alkyl group.

-I effect: The -I effect, also known as the negative inductive effect, occurs when an electron-withdrawing group is introduced to a chain of atoms. This results in the transmission of a positive charge through the chain. Example of -I species: Halogens (such as fluorine and chlorine).

Gauging the Stability of Molecules with the Inductive Effect (Solved Example)

Question: Which of the Following Compounds is the most stable? 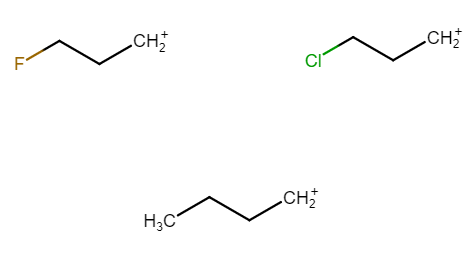 Answer: The compound with the methyl functional group (bottom) is the most stable since the CH3 group is a +I species, which increases the stability of the carbocation. Since fluorine and chlorine are electron-withdrawing -I groups, they decrease the stability of the carbocation by increasing the magnitude of the positive charge on it. However, the compound containing fluorine is less stable than the one containing chlorine (because fluorine is more electronegative and, therefore, more electron-withdrawing).

Question: Which of the following compounds has the highest acidity? 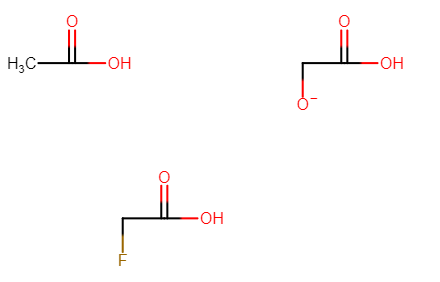 The electromeric effect involves the complete transfer of pi electrons to one of the bonded atoms in an organic compound. It is a temporary effect that occurs due to the presence of an attacking reagent (an electrophile or nucleophile that triggers the formation of a dipole in the organic compound). The electromeric effect subsides when the attacking reagent is removed from the system.

For example – the +E effect can be observed during the protonation of alkenes (illustrated below).

Carbocations are stabilized by adjacent sigma bonds that donate electrons to vacant p-orbitals. This effect is a permanent effect and is called hyperconjugation (also called no-bond resonance). Here, the delocalization of the positive charge increases the stability of the compound. 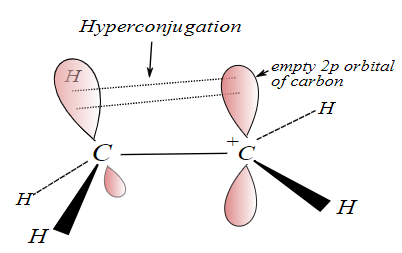 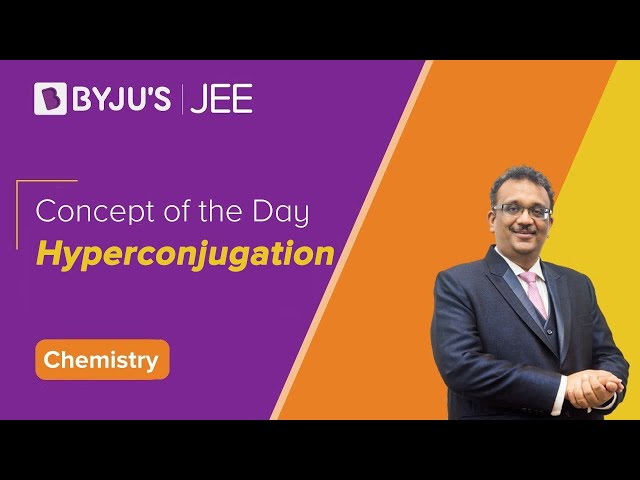 Gauging the Stability of Carbocations with Hyperconjugation (Solved Example)

Question: Rank the following carbocations in the increasing order of stability. 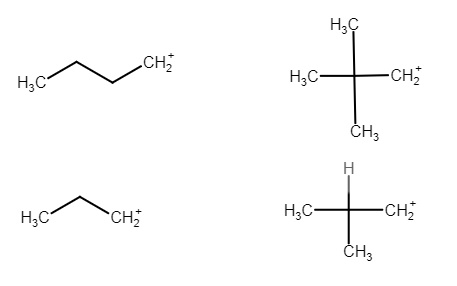 Answer: The total number of alpha-hydrogens is proportional to the stability of the carbocation (due to hyperconjugation). Therefore, the bottom-left and the top-left compounds are the most stable and the top-right compound is the least stable.

The mesomeric effect involves the delocalization of electrons over a network of pi bonds. The polarity that arises in organic compounds due to the interactions between two pi bonds (or a pi bond and a lone pair) is a consequence of the mesomeric effect. This effect can stabilize both negative and positive charges.

+M Effect: It involves the donation of electrons by a pi-system. Electrons typically move away from +M groups. An illustration detailing the +M effect in a methoxy ether molecule is provided below.

Examples of +M groups: O–, NH2, and OH groups. These groups usually contain a lone pair or a pi bond.

-M Effect: It involves the acceptance of electrons by a pi-system. Electrons typically move towards -M groups, as illustrated below.

Examples of -M groups: CHO and NO2 groups.

The OH group in a phenol molecule exhibits a +M effect, resulting in the delocalization of a lone pair of electrons (belonging to the oxygen atom) over the aromatic system (illustrated below).

Comparison Between Inductive and Mesomeric Effects

The resonance effect involves the delocalization of pi electrons and lone pairs over molecules. This results in several hypothetical molecular structures known as resonance structures. It occurs at an intramolecular level and does not alter the structural arrangement of atoms in the molecule (the arrangement of electrons can vary).

The stabilization offered by resonance is greatest when an equivalent resonating structure (known as a resonance hybrid) can be drawn for the molecule. An illustration detailing the resonance of an ozone molecule is provided below. 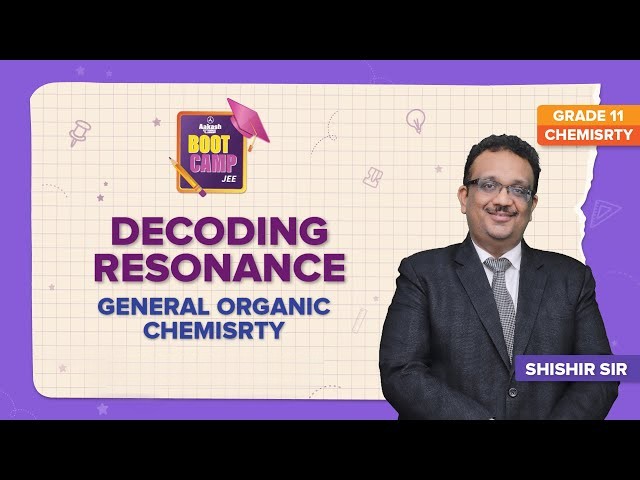 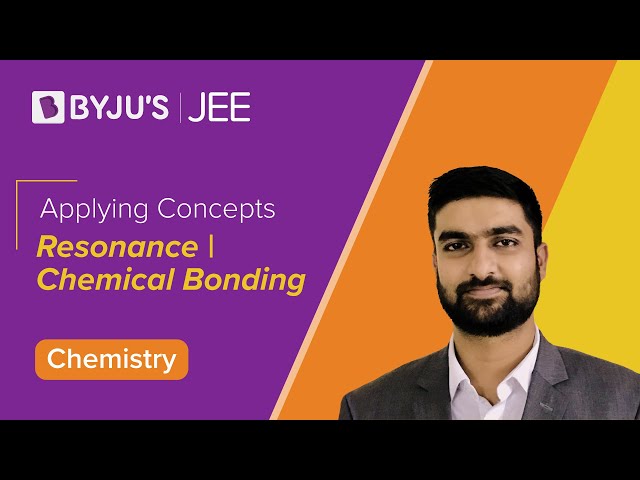 Isomerism is a phenomenon in which multiple compounds have the same chemical formula but feature different chemical structures. The chemical compounds that exhibit isomerism are called isomers.

Isomerism can be broadly classified into two categories:

Stereoisomerism is the phenomenon in which multiple molecules have the same chemical formulae but different three-dimensional orientations of the atoms.

An illustration detailing the different types of isomerism is provided below. 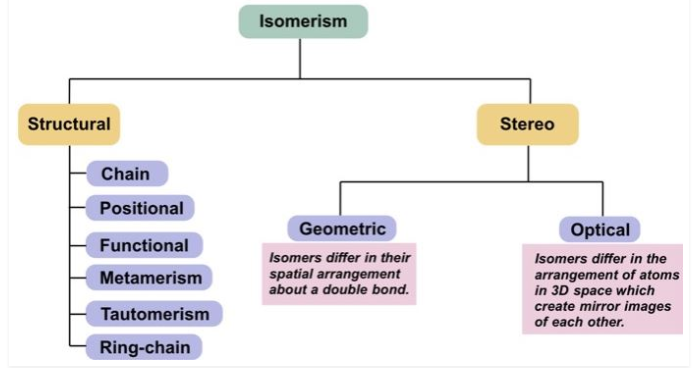 For an in-depth explanation of the different types of isomerism, visit our primary isomerism page. 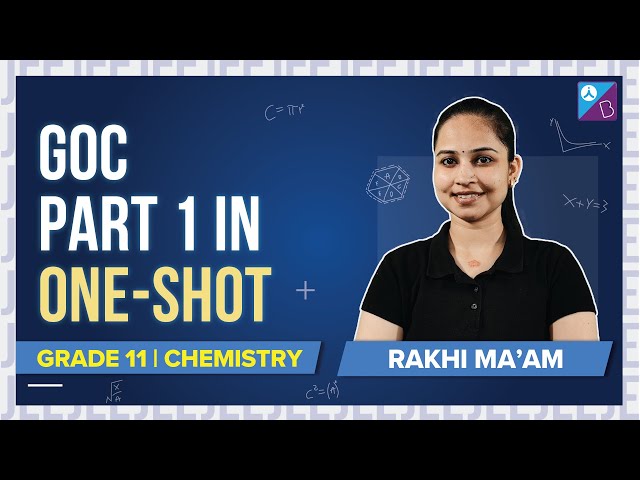 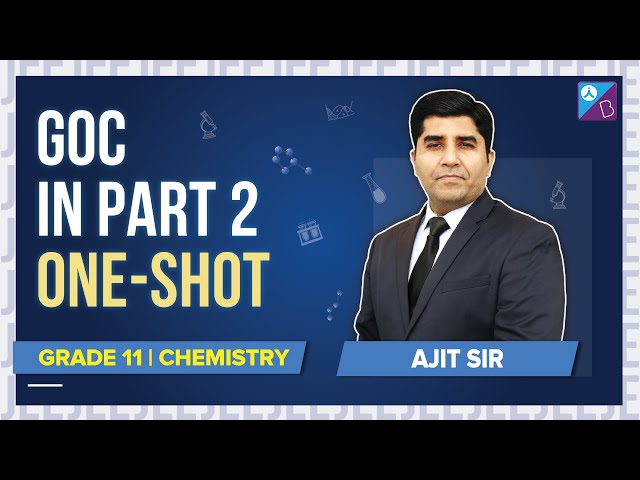 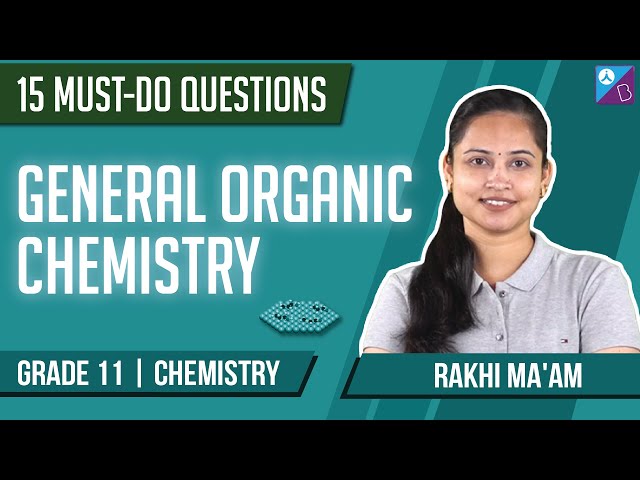 Visit BYJU’S for all JEE related queries and study materials