*According to the latest update on the CBSE Syllabus 2022-23, this chapter has been removed.

NCERT Solutions for Class 10 Science Chapter 5 – Periodic Classification of Elements at BYJU’S provides detailed solutions to all the questions as per CBSE guidelines. The solutions are in sync with the questions provided in the NCERT textbook and have been solved by subject matter experts, in accordance with the understanding level of Class 10 students.

The NCERT textbook is carefully designed so as to allow students to build complete knowledge of the subject. The NCERT Solutions furthermore ease the task of students for last-minute studies. The solutions provided are accurate and less complex.

The main aim of providing students with NCERT Solutions for Class 10 Science is to be beneficial enough to students, saving time that they spend browsing through different websites for solutions. It is an ultimate one-stop-shop for all their learning requirements and serves as an effective reference tool. 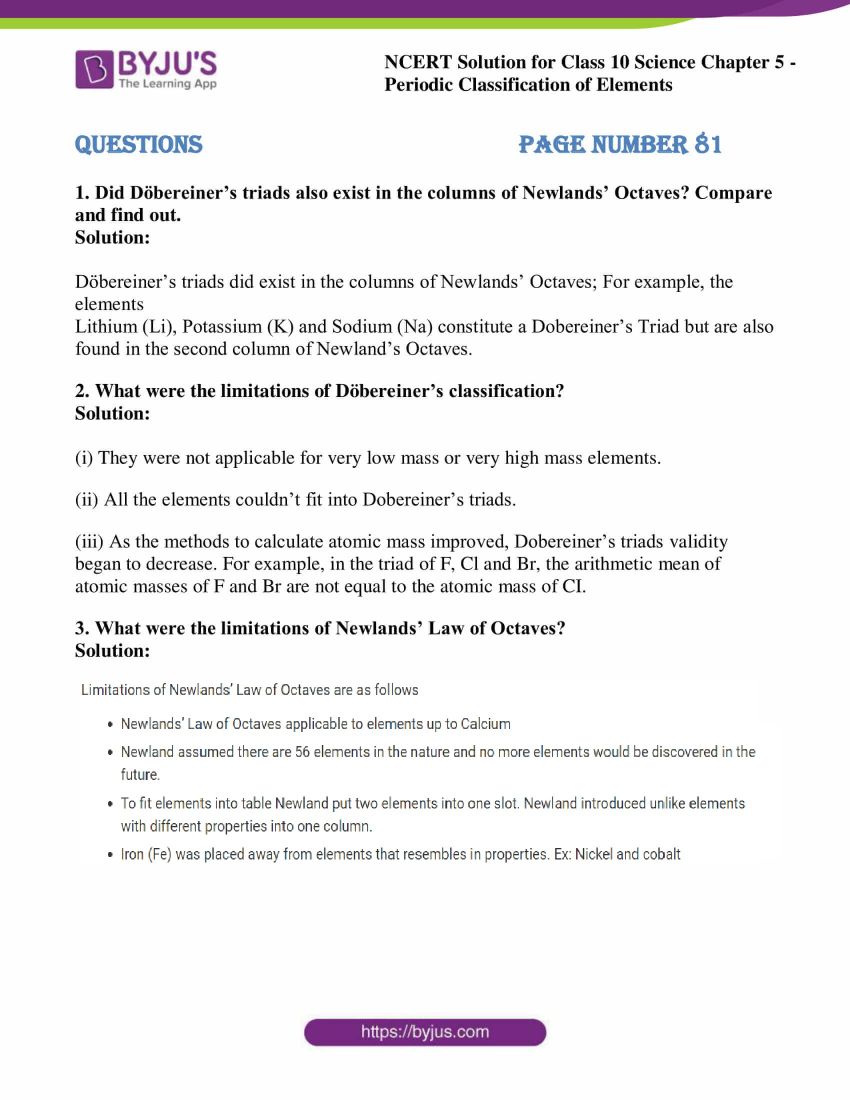 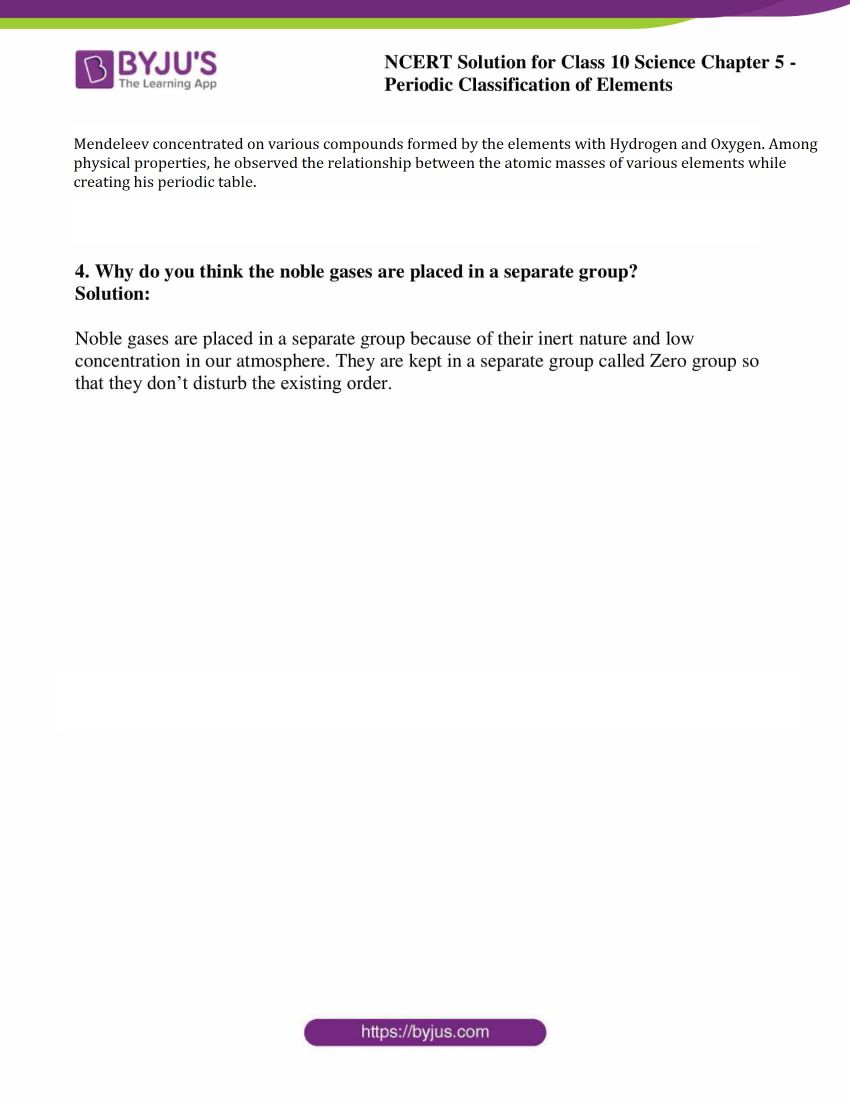 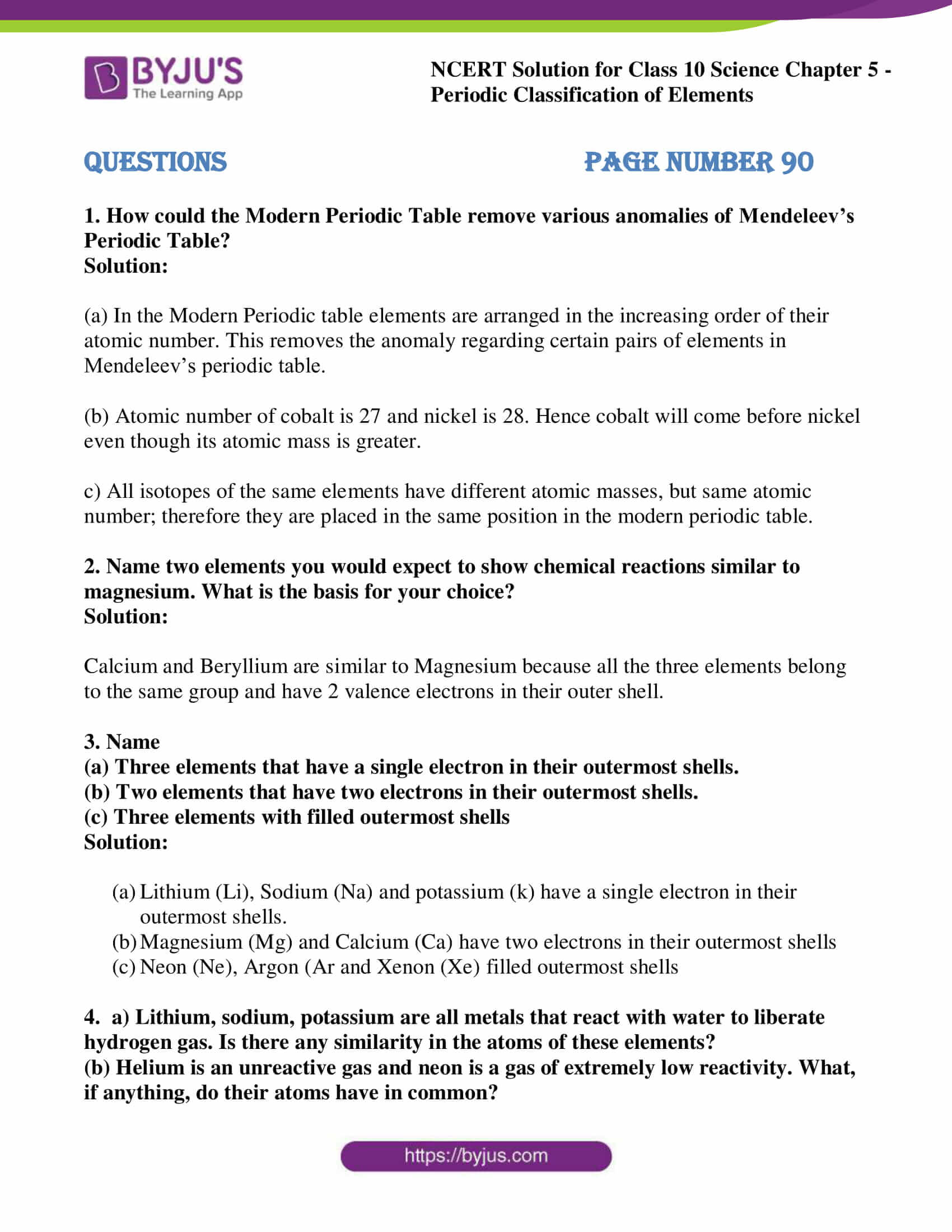 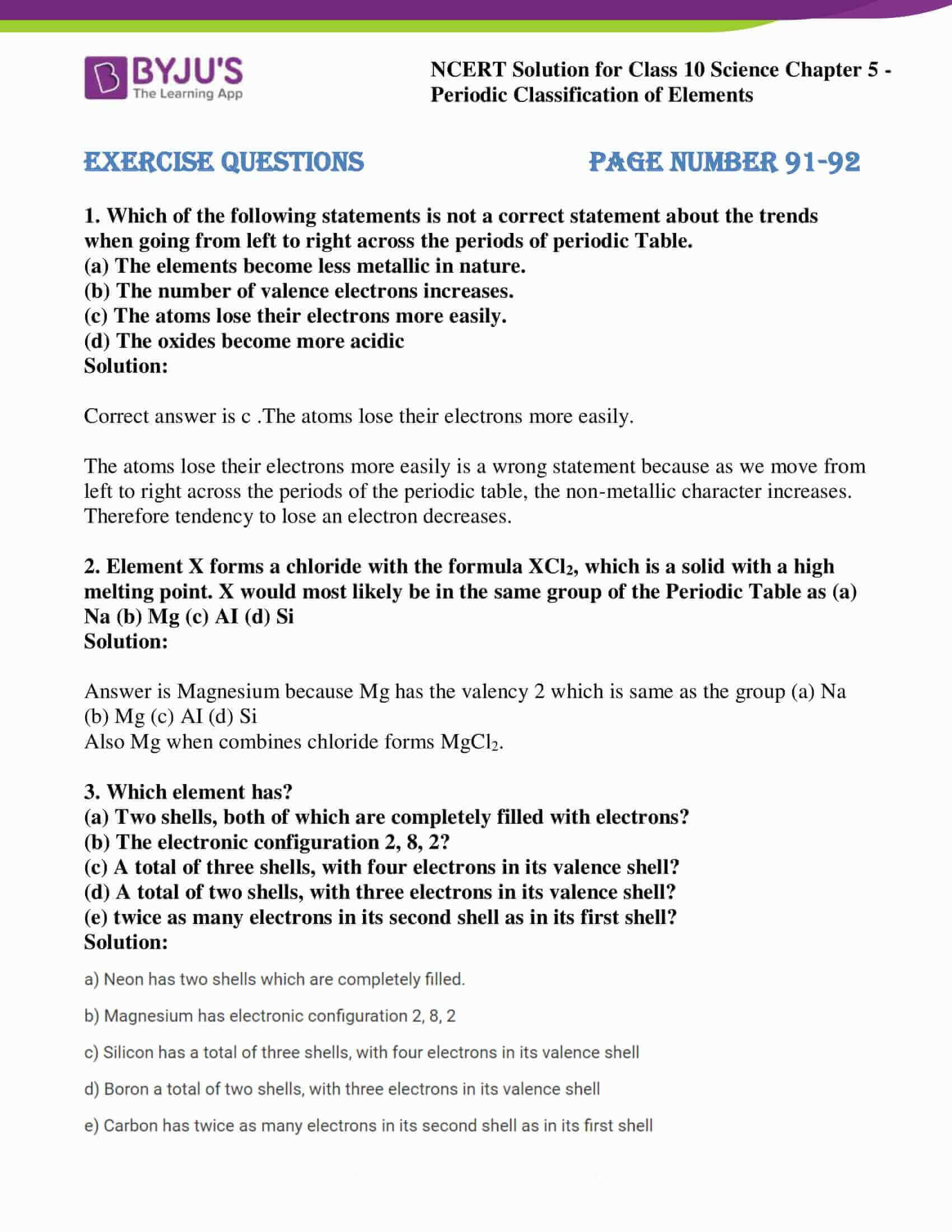 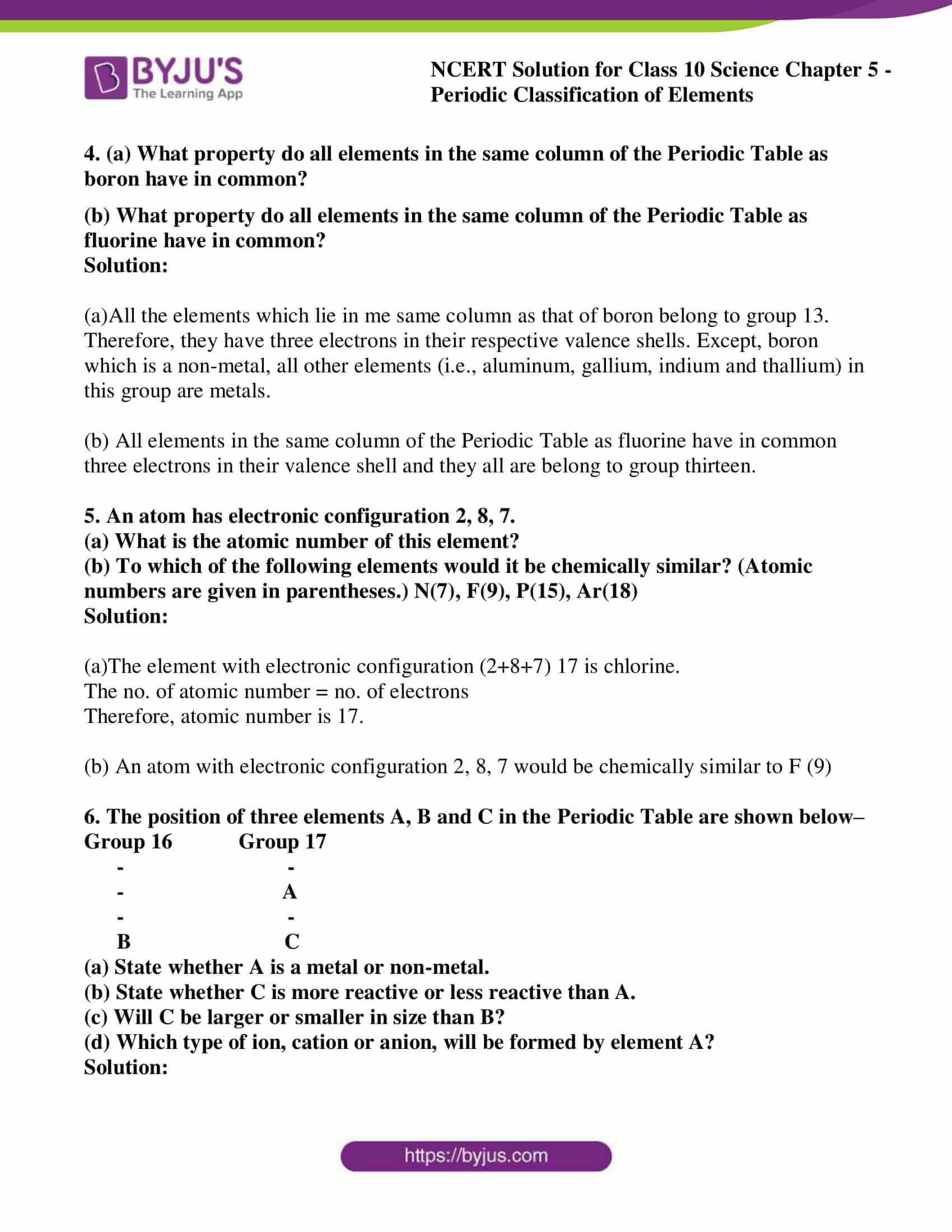 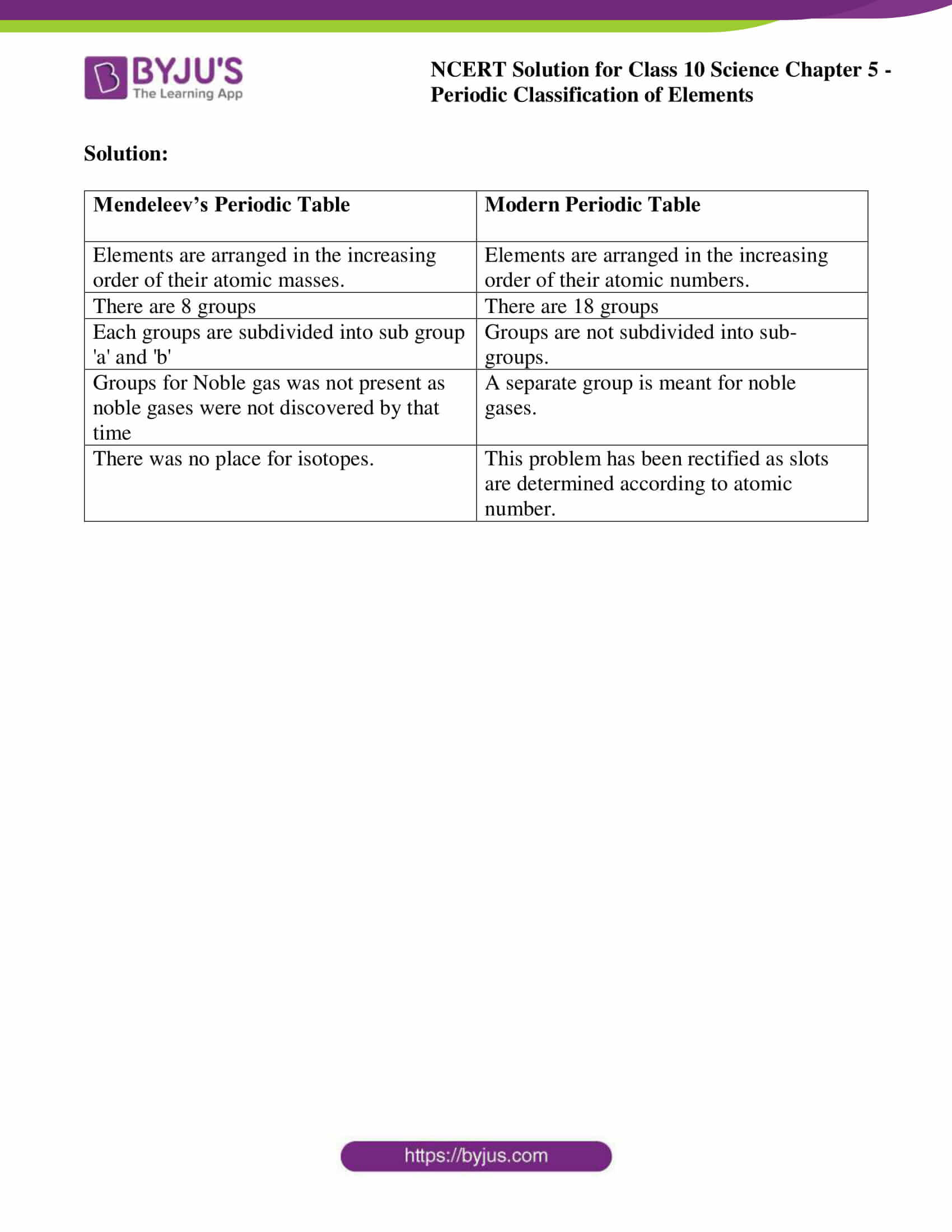 1. Did Döbereiner’s triads also exist in the columns of Newlands’ Octaves? Compare and find out.

Döbereiner’s triads did exist in the columns of Newlands’ Octaves; For example, the elements

Lithium (Li), Potassium (K) and Sodium (Na) constitute a Dobereiner’s Triad but are also found in the second column of Newland’s Octaves.

2. What were the limitations of Döbereiner’s classification?

(i) They were not applicable for very low mass or very high mass elements.

(ii) All the elements couldn’t fit into Dobereiner’s triads.

(iii) As the methods to calculate atomic mass improved, Dobereiner’s triads validity began to decrease. For example, in the triad of F, Cl and Br, the arithmetic mean of atomic masses of F and Br are not equal to the atomic mass of CI.

3. What were the limitations of Newlands’ Law of Octaves?

Limitations of Newlands’ Law of Octaves are as follows

1. Use Mendeleev’s Periodic Table to predict the formulae for the oxides of the following elements: K, C, AI, Si, Ba.

Oxygen is a member of group VI A in Mendeleev’s periodic table. Its valency is 2. Similarly, the valencies of all the elements listed can be predicted from their respective groups. This will help in writing the formulae of their oxides.

(i) Potassium (K) is a member of group IA. Its valency is 1. Therefore, the formula of it is K2O.

(iii) Aluminium (Al) belongs to groups III A and its valency is 3. The formula of its oxide is Al2O3.

(iv) Silicon (Si) is present in group IV A after carbon. Its valency is also 4. The formula oxide is Si2O4 or SiO2.

2. Besides gallium, which other elements have since been discovered that were left by Mendeleev in his Periodic Table? (Any two)

Germanium and Scandium are the element that are left by Mendeleev in his Periodic Table since its discovery.

3. What were the criteria used by Mendeleev in creating his Periodic Table?

Mendeleev concentrated on various compounds formed by the elements with Hydrogen and Oxygen. Among physical properties, he observed the relationship between the atomic masses of various elements while creating his periodic table.

4. Why do you think the noble gases are placed in a separate group?

(a) In the Modern Periodic table elements are arranged in the increasing order of their atomic number. This removes the anomaly regarding certain pairs of elements in Mendeleev’s periodic table.

(b) Atomic number of cobalt is 27 and nickel is 28. Hence, cobalt will come before nickel even though its atomic mass is greater.

c) All isotopes of the same elements have different atomic masses, but same atomic number; therefore they are placed in the same position in the modern periodic table.

2. Name two elements you would expect to show chemical reactions similar to magnesium. What is the basis for your choice?

Calcium and Beryllium are similar to Magnesium because all the three elements belong to the same group and have 2 valence electrons in their outer shell.

(a) Three elements that have a single electron in their outermost shells.

(b) Two elements that have two electrons in their outermost shells.

4. a) Lithium, sodium, potassium are all metals that react with water to liberate hydrogen gas. Is there any similarity in the atoms of these elements?

(b) Helium is an unreactive gas and neon is a gas of extremely low reactivity. What, if anything, do their atoms have in common?

They’ve one valence electron in their outermost shells and as a result of this, they are very unstable. So, they readily react with water to liberate hydrogen. They are also called alkali metals.

Their outermost shells are full leading to high stability. They react only in extreme circumstances and hence are called noble gases.

5. In the Modern Periodic Table, which are the metals among the first ten elements?

Lithium and Beryllium are the metals among the first ten elements in Modern Periodic Table.

6. By considering their position in the Periodic Table, which one of the following elements would you expect to have maximum metallic characteristic? Ga Ge As Se Be

Among the elements listed in the question. Be and Ga are expected to be most metallic. Out of Be and Ga, Ga is bigger in size and hence has a greater tendency to lose electrons than Be. Therefore, Ga is more metallic than Be.

1. Which of the following statements is not a correct statement about the trends when going from left to right across the periods of Periodic Table.

(a) The elements become less metallic in nature.

(b) The number of valence electrons increases.

The atoms lose their electrons more easily is a wrong statement because as we move from left to right across the periods of the periodic table, the non-metallic character increases.

2. Element X forms a chloride with the formula XCl2, which is a solid with a high melting point. X would most likely be in the same group of the Periodic Table as (a) Na (b) Mg (c) AI (d) Si

(a) Two shells, both of which are completely filled with electrons?

(c) A total of three shells, with four electrons in its valence shell?

(d) A total of two shells, with three electrons in its valence shell?

(e) twice as many electrons in its second shell as in its first shell?

a) Neon has two shells which are completely filled.

b) Magnesium has electronic configuration 2, 8, 2

c) Silicon has a total of three shells, with four electrons in its valence shell

d) Boron a total of two shells, with three electrons in its valence shell

4. (a) What property do all elements in the same column of the Periodic Table as boron have in common?

(b) What property do all elements in the same column of the Periodic Table as fluorine have in common?

(a) All the elements which lie in me same column as that of boron belong to group 13. Therefore, they have three electrons in their respective valence shells. Except, boron which is a non-metal, all other elements (i.e., aluminum, gallium, indium and thallium) in this group are metals.

(b) All elements in the same column of the Periodic Table as fluorine have in common three electrons in their valence shell and they all are belong to group thirteen.

(a) What is the atomic number of this element?

The no. of atomic number = no. of electrons

(b) An atom with electronic configuration 2, 8, 7 would be chemically similar to F (9)

6. The position of three elements A, B and C in the Periodic Table are shown below–

(a) State whether A is a metal or non-metal.

(b) State whether C is more reactive or less reactive than A.

(c) Will C be larger or smaller in size than B?

(d) Which type of ion, cation or anion, will be formed by element A?

7. Nitrogen (atomic number 7) and phosphorus (atomic number 15) belong to group 15 of the Periodic Table. Write the electronic configuration of these two elements. Which of these will be more electronegative? Why?

On moving down a group in the periodic table, the number of shell increases. Due to this, valence electrons move away from the electrons and the effective nuclear charge decreases. This causes the decrease in the tendency to attract electron and hence electro negativity decreases. Because of all these reasons Nitrogen is more electronegative than phosphorus.

8. How does the electronic configuration of an atom relate to its position in the Modern Periodic Table?

9. In the Modern Periodic Table, calcium (atomic number 20) is surrounded by elements with atomic numbers 12, 19, 21 and 38. Which of these have physical and chemical properties resembling calcium?

NCERT Class 10 Science Chapter 5- Periodic Classification of Elements is categorized under Unit Chemical Substances – Nature and behavior. This unit, on the whole, comprises 25 marks in the board exam, most compared to any chapter in the syllabus, hence all chapters in Unit Chemical Substances needs to be studied thoroughly. Periodic classification of elements chapter alone holds up 5 marks in the CBSE Term II exam as expected and from a careful analysis of previous question papers.

List of subtopics covered in Chapter 5 – Periodic Classification Of Elements:

5.1 Making Order Out of Chaos – Early Attempts At the Classification of Elements

We have been learning how various things or living beings can be classified on the basis of their properties. Even in other situations, we come across instances of organisations based on some properties. The topic discusses concepts of Dobereiner’s Triads and Newlands’ Law of Octaves. Both concepts are explained with suitable examples.

5.3 Making Order Out of Chaos – The Modern Periodic Table

-Early attempts at the classification of elements

Periodic Classification of elements gives a brief idea about how elements are classified based on the similarities in the properties shared by different elements. It briefly discusses how Dobereiner classified various elements into triads and how Newland proposed the Law of Octaves. The chapter briefly discusses arrangement of elements in increasing order of their atomic numbers and chemical properties as suggested by Mendeleev, as he even predicted the existence and presence of some more elements that are to be discovered yet which he arrived at due to gaps in the Periodic table.

The chapter also talks about the limitations of Mendeleev’s classification and hence the modern periodic table. It gives an idea of the positioning of elements in the modern periodic elements and also the vertical and horizontal arrangement known as groups and periods, respectively.

What are the concepts covered in the Chapter 5 of NCERT Solutions for Class 10 Science?

Explain the topic of Mendeleev’s Periodic Table covered in the Chapter 5 of NCERT Solutions for Class 10 Science.

The topic of Mendeleev’s Periodic Table in this chapter has –
1. The elements are arranged in the increasing order of their atomic masses.
2. 8 groups are present.
3. Each group is subdivided into sub groups ‘a’ and ‘b’.
4. Noble gases were not discovered that time so the groups for noble gas were not present.
5. Isotopes have no place.

Why should I refer to the NCERT Solutions for Class 10 Science Chapter 5?

1. The NCERT Solutions are created by considering the chapter-wise marks distribution as per the CBSE blueprint.
2. Elaborated solutions enable students to understand the concepts efficiently.
3. Step by step explanations are provided for the numericals present in this chapter.
4. Simplified and logical language is used in order to boost the confidence among students.
5. Pictorial representation is done wherever necessary to help students grasp concepts in a faster pace.